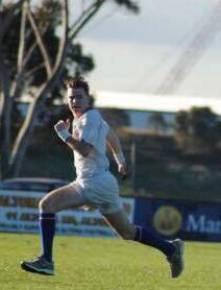 Every accomplishment, starts with the decision to try

Dean's umpiring journey began under the watchful eye of Terry O'Donnell, and the experience in his debut match continues to propel his career:

"After mirroring him for the first quarter, midway through the second he asked if I wished to run the play on my own. After shadowing behind me, Terry didn’t even come out in the fourth quarter, giving me huge confidence in how I officiated the game and that umpiring was the right choice for me". Family and friends provided support in different ways; Mum took photos while his best mate jeered his walk onto the ground.

In just his second season, Dean was appointed to the U16A Grand Final, confirming his status as an upcoming umpire. Higher honours followed in 2014 with the Division 2 U18 Division GF and he confirmed his place in the top flight with the Division 1 U18 decider the following year.

Dean's busy off-field life (he juggles bartending at Mynt in Werribee with studies in accounting at RMIT) means umpiring gives him an outlet to enjoy himself and forge friendships while working on his personal development: "I enjoy the professionalism and mateship of umpiring. Qualities required to umpire, such as dedication, leadership, fitness and knowledge are qualities I personally carry with me through life. The banter shared at training and on game day creates strong relationships between the association and community and I can see why so many guys have dedicated a majority of their life to umpiring the sport we all love".