The WRFL Umpires have defeated Grand United CC by 35 runs to take home the Stan Mielczarek Cup for the first time.

After three comfortable losses, the opposition were in a forgiving mood and put forward a bevy of under 14's players who made up for their small stature with some fine banter.

A skiddy pitch held few fears for our batsmen, who went hard at the slow offerings from ball one. Xavier Cooper survived a chance on the first ball of the innings but couldn't take full advantage, departing in the next over. Vaughan Garner fell in the same over but not before merrily dispatching a child over the mid-wicket boundary.

With wickets tumbling, Will Cumming-Gray held up an end while surprise number 4 Wayne Cooper kept up the attack, opening his account with a 6 on his way to a quickfire 25 retired. Mitch Haberecht's back to back dot balls incurred the wrath of captain Garner, who demanded a big shot or an early retirement. Haberecht responded with an impressive launch to the leg side and went on to top score with 29.

Aiden Williams played a few big shots of his own and enjoyed a big slice of luck when he drove a no ball to Grand United's best fielder, then survived an unwarranted run out appeal after walking half way to the boundary, unaware that he wasn't out. The same fielder managed some respite a few balls later, hitting the stumps from side on to find Adrian O'Donnell a couple of feet short. O'Donnell, aggrieved that he had been dismissed for the first time in four outings, took out his frustration by aggressively triggering the younger Williams on a close stumping call.

Geoff Tresidder picked up one boundary and, satisfied with his work, stepped on and struck his own stumps to deny the youngsters the satisfaction of earning his wicket. Scott Vanstone's hit out and get out innings brought the last pair of Tom Harrison and Darren Williams together; both batsman managed a 6 each to propel the score to 125 off the maximum 18 overs, however that wasn't enough for a run-thirsty Williams, who staunchly insisted that a missed leg side delivery asking to be slogged should be called wide.

Operating off a shortened run, Harrison produced pace and movement far beyond the openers' tolerances. Haberecht's best Daniel Vettori impression and a host of accurate slow medium bowlers led by Vanstone, O'Donnell and Indra Campbell maintained the pressure, and after 10 overs Grand United were struggling at 1/33. In fading light, runs finally started to flow as field settings were relaxed, catches were dropped and experimentation took over. Liberated by losing the gloves, Tresidder starred in the dying stages, sending down two unhittable overs and plucking a stunning catch close to the wicket. Despite only losing 4 wickets, the batsmen's lack of power ultimately proved the difference.

Many thanks to Grand United for once again hosting the event and providing a barbeque dinner post-match. 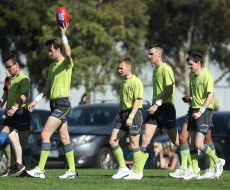 Values are important. They dictate thinking and they dictate performance and focus. In 2013 the umpiring body decided as a group what they would like their five core values to be and as an umpire, we strive to deliver on these in everything we do. Read More