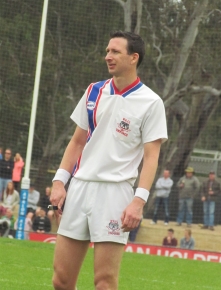 I can accept failure. Everybody fails at something. What I can't accept is giving up or not trying.

One of the most distinguished and longest serving umpires in the WRFL, Adrian O'Donnell is a name that, over the past 20 years, has become synonymous with senior football in the WRFL (if it wasn't already - his father is Terry O'Donnell, current secretary of the WRFLUA).

Many people will not know that Adrian started life as a boundary umpire at the tender age of 11 in 1992, and that he started umpiring primarily because his family was heavily involved in football and he wasn't much good at kicking a footy!

At age 16, Adrian umpired his first senior Division 1 game. He ran with current Director of Umpiring Mark Westgarth, shortly after Mark had returned from the AFL. He considers it a watershed moment and distinctly remembers the heat of the day, the increase in tempo from Division 2 football and the challenge of trying to step up to open age football and build relationships with senior adult players when he was only 16.

These days he just can't give it up and strives to do the best job he can in each and every game. He lives by the philosophy that each and every game you umpire is the most important game on that day to those particular players and officials, and you need to act accordingly. Perhaps that's why he's spent the better part of his life at the top of the game, and even added some icing on the cake with a year in the VFL in 2002 before family commitments forced him to pull back.

Adrian is married and has a wife and two young kids aged 6 and 4. He spends his days as a paraplanner (which he describes mysteriously as being "the strategic side of financial planning" (whatever that means)). He loves umpiring for the involvement in footy and the relationships you are able to develop through the football community. The fitness and life-skills (communication, decision-making, confidence) are also important to him.

He is currently a member of the WRFLUA executive committee.