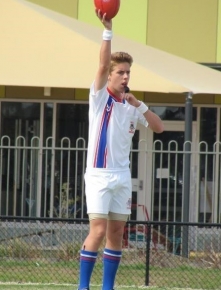 Always try your best and give things a try. Life isn't a straight road so don't be scared if it offers you a detour.

It's not easy keeping 44 highly strung players in check at any age, let alone while you're still at school. For 17 year old Ryan Webster, it's been part of his weekly winter routine for the best part of five years.

A footy lover from an early age, Ryan made the transition from player to umpire at the tender age of 13, learning the ropes on the boundary (fast discovering that collecting the ball from a busy road was a big no-no) before quickly swapping to the field, officiating junior matches on Sundays. It proved to be a wise decision; he was awarded the best first year male umpire at the end of the season and followed it up with two junior grand finals. The ease of his transition into the group rubbed off on father Barry, who started joining his son at training and made his own mark as a goal umpire.

Making his Division 1 debut in 2013, the Year 12 Mackillop College student had a breakout season the following year, getting an extended run at the top level, umpiring the Division 1 Under 18 grand final and being awarded the Darren Mills Trophy for most promising umpire. Still the youngest of a promising bunch regularly umpiring Division 1 football, Ryan is aiming high; his goals for 2015 are to be selected for a senior grand final and continue to improve his skills.

Ryan believes umpiring has been somewhat of a calling, and judging by his experiences, it is something he will continue for years to come. "I think I'll always want to do it, to be involved and help out. I love the friends I have made and the opportunities it has given me....The camaraderie, the mates I've made and the people involved, (umpiring is) great to be a part of and continues to challenge me, week in, week out."