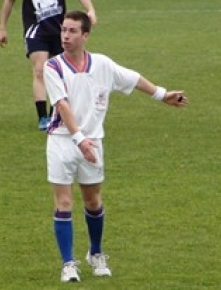 Like many young umpires, Cameron began his career on the boundary, though circumstances tried to stop him getting on the field.

"My first appointed game was an U18s game at Hoppers Crossing. I remember getting up and was extremely nervous but excited, however when I got to the ground, the game had been forfeited as the opposition didn't have enough players to fill a side." A second debut attempt the following week at Deer Park proved more successful, and Cameron hasn't looked back.

Starting at just 13, Cameron had plenty of time to hone his umpiring skills running the lines, but nonetheless moved quickly through the ranks with the Division 1 U18 GF in 2011 and the Division 2 decider the following year. The rapid progression enabled a smooth transition to the field, where he has continued building an impressive resumé, achieving a long held goal of umpiring at the top level in two disciplines, picking up the WRFLUA Most Promising Field Umpire gong in 2013 and accumulating three senior Grand Finals by the age of 19, including the Division 1 Reserves last season.

An electrical engineering student at RMIT, Cameron enjoys all the great aspects of umpiring, such as camaraderie, friendship, meeting new people, keeping fit and the general challenges it poses. Not one to look too far ahead, his 2016 goals include performing consistently and being the best umpire he can be.