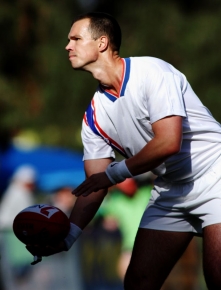 I heard on the radio that they weren't going to be able to run an U9's competition due to lack of umpires and I thought, 'Surely I can do that.' I rang AFL Victoria and they put me in touch with the WRFL. The next week I was doing an Under 14's.

Christian joined umpiring via a rather unusual route. He started umpiring in Round 5, 2010 after spending 10 years in the Army Reserve as an infantry soldier.

In 2009 Christian started to find his time in the infantry less enjoyable and started to look for alternative pastimes. Then, while at the football one day, he heard the commentators on the radio talking about how, due to lack of umpires in a particular competition, they might not be able to run an Under 9's competition. He thought: "Surely I can do that."

The next day, he sent an email to AFL Victoria asking how to go about umpiring, and he was put in touch with the WRFL's then Head Coach, Shane Carland.

"I'll never forget turning up to training on that first Wednesday night," Christian says. "Shane said to me, 'Do you want to do a game this weekend?'"

"My first response was, 'Don't I have to know what I'm doing first?'"

Christian started training with the WRFL Umpires and that weekend his first game was an Under 14s in Flemington on a blustery Sunday morning.

"I ran around that first quarter like a madman, and I got to quarter time exhausted. I was thinking, 'My God, how am I going to do this for a whole game?'"

Fortunately, Christian's young partner took him aside and explained what he was doing wrong. "I was doing it like the AFL umpires and trying to go around the boundary the whole time. Nobody had told me I had to stay in the middle of the ground."

Christian says he never expected to do seniors. "I always thought that was for other people. When I started training, I was so unfit compared to the other guys, even with my Army background. I figured it would take me years to get to their level, if ever."

Despite this, Christian did his first Division 2 Seniors game in 2011, and his first Division 1 Seniors game in 2012. He is a fast learner, and while he's not as quick as some of the other umpires, he likes to think he can compensate with maturity, keeping a cool head under pressure, and always listening to what the coaches have to say. "If I listen to what they say and I do my best to implement change, then I'm doing my best. At the end of the day, that's all anybody can do."

Despite being a field umpire in three Grand Finals, Christian counts the highlight of his umpiring career so far as being one of three field umpires chosen for the 2013 WRFL Good Friday Game.

"I got to run with two of the umpires from the previous year's Division 1 Seniors Grand Final (Adrian O'Donnell and Mat Westgarth) and it was one of those days where everything just went right. I felt we all made the right decisions at the right times and umpired well as a team."

This year, Christian is taking a step back after doing last year's Division 1 U18's Grand Final for the second year running. He has a young son and a baby on the way in May. His busy family life coupled with work commitments is forcing him to wind back his training and umpiring commitments for a year to spend more time with his young ones.

"I'll be back, though," Christian says. "I enjoy it too much to give it up altogether."